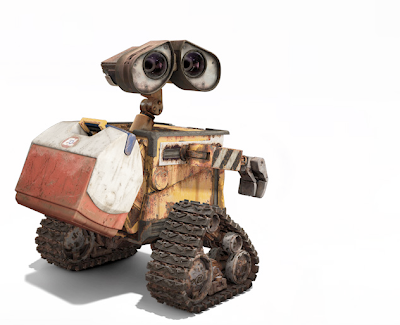 Hello again, it must be Friday because it's Big Chuck and tonight we're eating steak! If you haven't guessed from today's post title, it's all about robots.

Earlier this week I was out with my girl to check out the new flick by the computer geeks at Pixar, here are a series of vignettes which she hasn't seen yet and will probably have a good giggle over.

Being part computer geek myself I recognized Wall-E's boot up sound as that of a Mac, seems that this vignette is hosted at apple.com, hmmm, connection? Mac and Disney in cahoots?

Not to be a downer but while I think the message in the film is an important one - we should get our act together and stop polluting the environment or one day the planet may not even be livable - I am a bit suspicious of the source of that message.

So I was prompted to dig a bit deeper. I am fond of digging, check last Friday's post if you haven't already read it.

Turns out someone is already has already figured it out. Is Apple one to be preaching about the merits of recycling and the dangers of disposable culture? You tell me!

For the fun part of today's program we are taking a virtual tour of all things robot on the web.

First off, taking a cue from my host here, is a Canadian gem which we contributed to the International Space Station. Looks like Canadians may be able to do more than extract natural resources, eh?

Or are you part of the crowd firing up the hummer hoping the Arctic is going to melt? That's what Stephen Harper would call job creation!

Because I should probably get to work, I'll take advantage of a pre-compiled list of the top 10 coolest robots.
Labels: freestylin fridays